We thank all who joined us today as we remember those who have fallen. Lest We Forget

Remembrance Day, November 11th, is the anniversary of the Armistice, which was signed in the forest of Compiegne on the Western Front by the Allies and the Germans in 1918, ending World War 1 after four years of conflict.

At 0500 hours on Monday November 11th 1918 the Germans signed the Armistice; an order was issued for all firing to cease at 1100 hours that day, so the hostilities of the First World War ended. 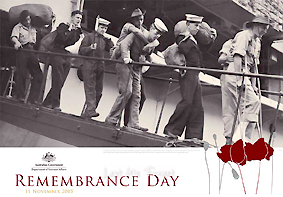 This day began with the laying down of arms, blowing of whistles, impromptu parades and at home the closing of places of business as the news filtered through, all over the globe, there were many demonstrations; no doubt the world has never before witnessed such rejoicing.

At the outbreak of World War 1, just 13 years after Federation, Australia was a fledgling nation with a population of 4,875,325 people. Australia deployed approximately 330,000 Service personnel overseas, many of the them aged 16 – 30 years. Of these some 59,342 were killed or died of wounds and a further 152,171 were wounded.

This meant that two out of every three were either killed or wounded. Almost every family in Australia was personally affected. One cannot even begin to imagine the horrors of the Somme, which cost the Allies over 60,000 lives in one day.

Let Us Take A Moment

Take a moment
To remember why we now live in freedom
Take a moment to remember the young men
Who were shot to death on the battlefields
Who fell from the skies
Who drowned in sinking ships and pools of their own blood
Take a moment
To remember
Each and every one of the millions of
Men, women and children
Who died senselessly and agonizingly at the hands of war
How many moments would it take
To picture each one of their tormented faces
To imagine the grief-stricken howling that rippled through each broken heart
Through the walls of each home
Into the streets
And into the world
Listen quietly for a moment
Can you hear their spine chilling cries for mercy
Remember them exactly
In their most private moments of terror
How fragile they were
How fragile we are
Wanting to live our simple everyday lives in freedom
Then take a moment
And remember them exactly
And tell them to their faces
It was worth it
And so a new day begins…