Burleigh Heads RSL Sub-Branch, which is a local chapter of the Returned & Services League of Australia and Queensland, turned 65 years old on the 3rd January 2004. The Burleigh RSL received it’s charter on the 3rd January 1939. The original ANZAC’s were hard at work in the Burleigh region many years long before that event ever occurred. They were commemorating and organizing ANZAC Day services at least as early as 1935. As testimony to this, an early program dated Wednesday 25th April 1935 for the occasion quotes “And we will remember them”. It is more than likely these memorials commenced earlier than 1935. 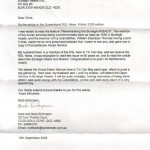 One of the early Burleigh ANZAC’s was a RAN Chief Petty Officer William Ebenezer Thomas who was instrumental in organizing ANZAC services to remember our war dead during the early days after the great war (WW1). Whether he was part of the group that formed the Burleigh Heads RSL or as it was known RSSAILA (Returned Sailors, Soldiers and Airmen’s Imperial League of Australia) Sub-Branch in 1938 is not evident in records.
Although this event was a very courageous one considering the dark clouds of war forming over Europe again in 1938. The Burleigh ANZAC’s carried on the tradition during the second world war years by commemorating our war dead. Considering Burleigh was a small seaside village, the sub-branch was struggling to survive and towards the late forties started to recruit some of the younger 2nd AIF boys, thereby ensuring their continuance. In 1953, the Members, under the Presidency of Kevin Snee (2nd AIF), acquired a state government grant of land and built a community hall on Sixth Ave in Burleigh. The hall was completed in 1956 and still stands today as a testimony to those original and new ANZAC’s.

Membership seesawed and struggled for many years and continued this way until 1994, when the “Australia Remembers” program was implemented and appeared to rekindle interest in the league and ANZAC Day. Today Remembering our Ex-Service people, who sacrificed so much for our way of life again became a treasured event as it was in years gone by. In the last few years, the crowds attending the Burleigh Heads RSL ANZAC day commemorations have swelled to in excess of five thousand. The last few years has seen Burleigh Heads RSL Sub-Branch membership climb to almost 250, something which could never have been envisaged by those forefathers back in 1938. Nor would anyone then have expected the Sub Branch to have the strong and hard-working Women’s Auxiliary that we enjoy and have enjoyed since it’s formation on September 2nd, 1953.

Veterans and ex-service people are returning to the “grass roots” of the RSL, which we promote at Burleigh Heads RSL Sub Branch. We just have an oldfashioned Memorial Hall that is used as a meeting place for members and is also made available to the local community groups for them to hold events at a low cost. We are NOT a licenced club, we do not have poker machines or late night “sessions”. Instead we promote regular social gatherings where members enjoy true “mateship” and camaraderie.

“Lest We forget’, the Government should be congratulated for it’s support of commemoration programs such as the “Australia Remembers 1945-1995”, “their service, our heritage” and “Saluting their service”. All these programs have helped rekindle that ANZAC spirit that exists in all of us and assist to keep the memories of the sacrifice of veterans made in all wars in the minds of our young and old.

Burleigh Heads RSL members can attest to the fact that the abovementioned programs, that our governments have promoted, have helped keep and maintain a landmark such as the Burleigh Heads RSL Hall viable, not only for the Sub-Branch members, but also for many small groups who use the hall as their meeting place. Most importantly, Burleigh Heads RSL Sub Branch is as active today as it was in 1935, keeping the spirit of the ANZAC’s alive by the hosting of commemorations on those special days of remembrance each year.
Compiled by Christopher P Keating, JP, C Dec. (2005)